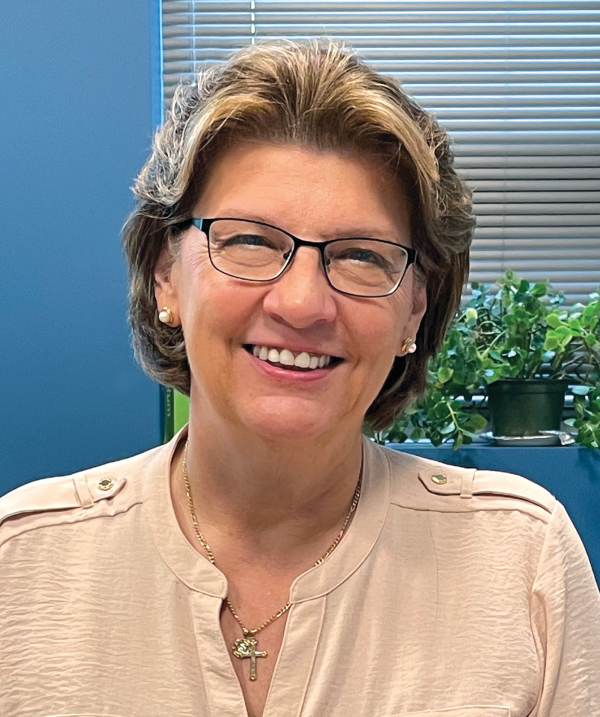 We Spoke to Cheryl Kahanec of Quantum Group

As part of our series called ‘Five Things I Wish Someone Told Me Before I Became A CEO,’ we had the pleasure of interviewing Cheryl Kahanec.

Cheryl Kahanec is the CEO of the Quantum Group. She is also a Valued Production Print Solutions customer of Canon Solutions America, a Canon U.S.A. company.

When I was 19 years old, I was going to school for accounting, but my mother took ill. So for family reasons, I needed to concentrate on a full-time position, which changed the trajectory of my life. I took an entry-level accounting position to add waybills for the Boston and Maine Railroad. It was a full-time job that paid a good wage with benefits. After a few months, the VP of Finance said I had computer-type abilities and suggested a job as a typesetter and within a year I was the head of the department. That was the beginning of my printing career.

I wanted to learn everything I could about printing, so I went to Printing Industries of New England (PINE), then attended every graphic arts program available.

Soon after, I went to New York City and worked for a typesetting and prepress company that prepared printing film and printed article re-prints for magazines. The owner saw a different path for me to grow, which was a new adventure I would embark on in sales.

I was fortunate to bring that skill to multiple companies, which led me to becoming a sales manager, then vice president of sales and then vice president of the magazine division of a national prepress company. I was able to grow in the printing industry throughout the years and experienced great evolution in technology, particularly when digital printing came about. I just fell in love with the technology and the industry.

Can you share the most interesting story that happened to you?

I’ve been with Quantum Group for four years, which was the first time I came into a company as a CEO. The first day, they asked what I wanted, and I said, “to meet everyone.” They assumed that meant only the management team. I explained that I wanted to meet everybody. I realized they were struggling with that concept. Sometimes, it can be a little too much “us and them,” and I believe to be successful, it needs to be “us.” That’s probably the first thing I learned when I came here; I needed to take this company and make it one instead of different groups and different departments within the company. It was a big change.

Is there a particular person who you are grateful for who helped you get where you are and can you share a story about that?

The first is my mother. She taught me that the only one who could hold me back was myself. This was a great lesson that led me to be an excellent typesetter even with the challenge of dyslexia. She also taught me to be brave. In the early days of my sales career, operators would take my calls and transfer those calls to executives, but I was having no luck. My mother said get there early before the operator because executives get there early and are more likely to answer. It worked and was the advice that helped me succeed in sales.

Another woman in my life is Diane Romano, who was a success in her own career as owner of a company called HudsonYards for many years. Being one of the few women in this industry, Diane was not only a boss earlier in my career, but is a mentor to this day. She was a big influence on my career because she was willing to take risks and potentially make a mistake to get to the next step, but was always prepared to handle the outcome. That’s what she taught me; not being afraid of failure as long as you’re prepared to make the next step.

According to an EY report, only about 20 percent of funded companies have women founders. This reflects great historical progress, but it also shows that more work still has to be done to empower women to create companies. In your opinion and experience, what is currently holding back women from leading companies?

Women tend to not push as hard as we should for a seat at the table. I have found that sometimes it’s easier to be №2 then to be fully accountable as №1. I have experienced working with great men and there was one in particular where we were chosen to run a company together. I had the experience and technological knowledge, and he had experience in another segment of the industry. So it was a great pairing, but he had the superior position. It was just automatically done that way. I accepted it, and I should not have. Sheryl Sandberg said, ‘Lean in.’ I agree. Lean in and step up. I don’t know why we feel that if we self-advocate we are braggers. It’s OK to be knowledgeable.

Can you help articulate a few things that can be done as individuals, as a society, or by the government, to help overcome those obstacles?

I think the good news is, as a society, the younger generations don’t look at things like gender, race or sexual preference and biases the way the older generation does; they are more neutral. I look at my children who are in their late 20s and early 30s and they look at things very differently than my generation does. I think our government hasn’t kept up with those changes as much as it should. We need to continue to advocate in that area. The associations are very strong in the industry for women; they are empowering each other. I also think we have a personal responsibility to mentor young people, especially young women.

What are the “myths” that you would like to dispel about being a CEO? Can you explain what you mean?

One myth is that women are weaker leaders than men by nature. I don’t think that’s true at all. I think we can be stronger leaders because we may have a natural empathy; I call it the mother’s empathy. We also understand that empathy isn’t an excuse. We should show people respect and understand that everyone has individual challenges, but make those challenges become assets to us. Since I’ve been here, we’ve worked with organizations to hire individuals with disabilities, and it has been such a positive experience. Those are the types of programs that I think women have a tendency to bring to a company as leaders.

Is everyone cut out to be a founder or leader? What specific traits increase the likelihood that a person will be a successful founder or leader and what type of person should perhaps seek a “regular’’ job as an employee? Can you explain what you mean?

Many different decisions need to be made on a daily basis, so it is important to have a sense of calmness. You want to collect all the facts and react logically because these decisions affect people, and the worst thing you can do is jump the gun. Listen to all the information. The response to COVID has been a big example of that. And choose vendors and strategic partners that reflect your values and approach to business.

Based on your opinion and experience, what are the “Five Things You Need to Thrive and Succeed as a Woman Leader’’?

1. Empathy. As a leader it is important to remember that every decision we make ultimately affects people.

2. Respect. It’s respect for all of your employees and their individual contributions. Pay scale should never be a determining factor; only job performance, teamwork and effort should be considered.

3. Know your business. The way we do business is constantly evolving. Leaders need to be flexible and willing to be able to pivot their business to stay relevant. Always have a Plan B.

4. Determination. If we’re living in the mode of “why something can’t be done” instead of “how to get it done,” we’ll never succeed.

I am involved in mentoring young women and young men and find it such an important and rewarding experience. I try to actively support industry initiatives that both help with education and support our local community.

At a company level, we are working on different programs that include internships and sponsorship for education, especially anything that is job related. On a personal level, I’m a firm believer that we have an innate responsibility that is financial, moral and ethical to support our elderly, children and others who are vulnerable and would be an advocate for a movement in that area.

Is there a person with whom you would love to have a private breakfast or lunch with and why?

Michelle Obama. I find her story amazing and think she is so strong. Being First Lady had many responsibilities, and being the first Black First Lady also carried a lot of criticisms from everywhere in the world. Having her family under the microscope had to be difficult, yet she’s raised two beautiful daughters. To watch their family unit is incredible. I’d love to talk with her and I think it’d be a fascinating conversation.